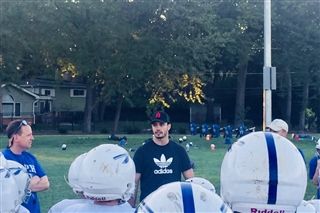 9/14/2018
OLPH School alumnus, Peter Pujals, stopped by Flick Park this week to pay a visit to this year's Warriors.

Our Lady of Perpetual Help School alumnus, Peter Pujals, recently spent some time with the current football players at OLPH. Pujals, who also played at Loyola Academy, and later starred at Holy Cross, recently spent time with the Minnesota Vikings, before being released at the end of August. While hoping to be picked up by another NFL team, the former quarterback stopped by practice at Flick Park to offer some words of encouragement and to share some of the knowledge gleaned from playing football at the highest levels.
According to Coach Jim O’Gara, the players were inspired to hear from a player that was standing in their exact footsteps, and on the exact field, just a short time ago. Pujals reinforced some of the tenets of OLPH athletics by encouraging the boys to work hard, listen to their coaches, and find ways to overcome adversity by developing resiliency.
Back
1/1